Fedagroowns a 40% share in SocietàGestioneMercato, the company that operates Genoa’s Produce Market,with C.O.M.A.G., the consortium of Genoa’s produce market dealers.

Fedagro, a member of Ascom Confcommercio, was established in Genoa in 1946 and has represented the trade ever since, both as a workers’ trade union and as a business representative.

Fedagro has participated in the construction of Genoa’s Produce Market right from the beginning, working in partnership with public partners on construction of this second-generation food and agriculture centre. The wholesaler dealers in Genoa’s market contributed private capital to add to public investment, allocating 6 of the 35 million euro required to build the market, plus another 6 million to set up the stands, which each dealer was able to customise as required.

Each dealer has one or more modular stands of different sizes; the minimum size is a single module measuring 7 by 21 metres.

Every stand has scales, refrigerating cells and a cashier’s box as well as a bay opening on the outside of the facility for speeding up loading and unloading of trucks. The area in front of each stand includes a marked space where each wholesaler may display goods for buyers. The 27 dealers’ administrative offices open onto a horseshoe-shaped walkway on the upper level; the spaces are designed so that each dealer’s office is right over the corresponding stand on the ground floor, and of exactly the same size.

A total of about 250 people work for the wholesalers operating in Genoa’s Produce Market. 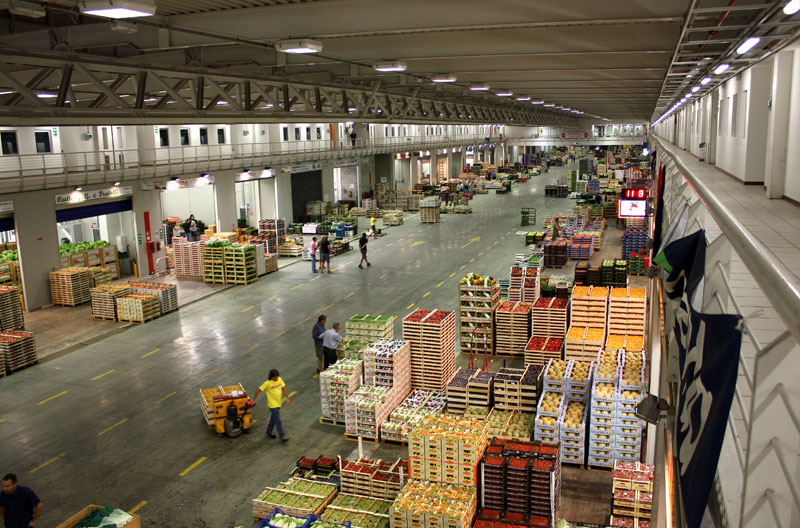